2020’s States with the Highest Political Engagement Among African Americans

While black voters turned out at the polls in unprecedented numbers during the 2008 and 2012 elections, black voter turnout fell during the 2016 presidential election. The winner of that election, Donald Trump, received approximately 8 percent of the black vote, compared to 88% for his rival Hillary Clinton.

This year, black voters will account for around 12 percent of the national electorate. However, they make up roughly 24 percent of the Democratic primary electorate, which means they will play a key role in selecting 2020’s Democratic nominee. A January poll shows Joe Biden with 48% support among black Democrats, far above the next closest, Bernie Sanders with 20%.

Regardless of what candidates black voters choose to support, it’s clear that black Americans in some states are more politically engaged than those in other states. Identifying where on the map this demographic is most politically active — and therefore likely to maximize their electoral clout — helps to put this election year and racial-gap issues into context.

In honor of Black History Month and with presidential primaries in full swing, WalletHub compared 49 states across six key metrics that speak to the level of black political engagement. Our data set includes black voter turnout and registration during the most recent presidential and midterm elections as well as the proportional representation of blacks in the state legislature and national party conventions. Scroll down for the complete ranking, expert political commentary and our detailed methodology. 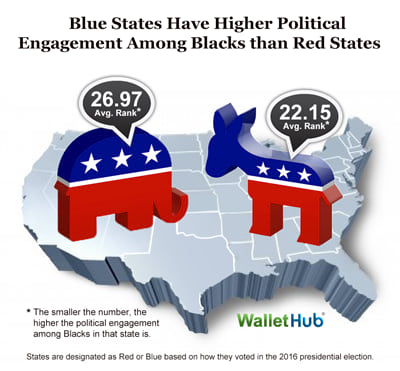 Although the black voter-turnout rate in presidential elections rose since 1996 until the 2016 election, it remains lower in certain areas compared with others. In order to understand the reasons behind the low turnout and to find solutions to voting roadblocks for racial minorities, we turned to a panel of experts in fields such as political science and African-American studies. Click on the experts’ profiles to read their bios and thoughts on the following key questions:

In order to determine where black Americans are most politically engaged, WalletHub compared 49 states across six key metrics. Idaho and Montana were not included in the sample due to data limitations. The metrics are listed below with their corresponding weights. Each metric was given a value between 0 and 100, wherein 100 is the best value for that metric and 0 is the worst.

We then determined each state’s weighted average across all metrics to calculate its overall score and used the resulting scores to rank-order our sample.

Videos for News Use:

Sources: Data used to create these rankings were collected from the U.S. Census Bureau, the Joint Center for Political and Economic Studies and United States House of Representatives.

Was this article helpful?

Awesome! Thanks for your feedback.

Thank you for your feedback.

Disclaimer: Editorial and user-generated content is not provided or commissioned by financial institutions. Opinions expressed here are the author’s alone and have not been approved or otherwise endorsed by any financial institution, including those that are WalletHub advertising partners. Our content is intended for informational purposes only, and we encourage everyone to respect our content guidelines. Please keep in mind that it is not a financial institution’s responsibility to ensure all posts and questions are answered.

Ad Disclosure: Certain offers that appear on this site originate from paying advertisers, and this will be noted on an offer’s details page using the designation “Sponsored”, where applicable. Advertising may impact how and where products appear on this site (including, for example, the order in which they appear). At WalletHub we try to present a wide array of offers, but our offers do not represent all financial services companies or products.

I Average 5 Hours of Sleep, But No One Knows Thanks to These 15 Eye Creams

Electorate Representation Index: Which States Most Closely Resemble the U.S.?